skip to main | skip to sidebar

Birth: the Surprising History of How We Are Born 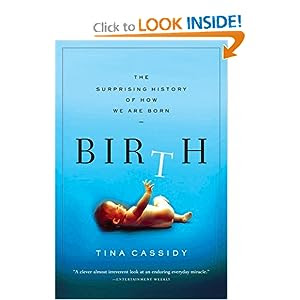 Birth: the Surprising History of How We Are Born by Tina Cassidy definitely feels like what it is - an overview written by a journalist.  Journalists are by trade and often personality disposed to facts over feelings, the story over one's opinions about the story.  And this book is pretty thoroughly non-judgmental.  Since I am not, in the privacy of my own mind, non-judgmental about the history of birth, it was an interesting difference of perspective for me.

One factoid that stuck out at me from the book was the description of the surgical procedure called symphyseotomy, where a doctor would cut through the soft tissues of the mother's genitalia, and then manually separate the cartilage in her pubic bone to create a wider opening for the baby to come through.  This was (and in some places where a cesarean is radically unsafe or simply unavailable, still is) used as an alternative to  unsafe cesareans before anesthesia and an understanding of preventing infection. A third of the mothers and half of the babies died, but this was apparently a better mortality rate than cesareans could offer at the time.  I'm not sure I'd ever read about this before, but it is truly horrifying to me.

The other factoid that stuck out is related.  I know I had read about how rickets deformed women's pelvises and led to the need for such horrific - and desperate - measures, but I hadn't remembered the details.  Pelvic openings of 2 inches.  Yikes.  And no 99% effective birth control other than simply never having intercourse.  Double yikes.  I did like the (probably anecdotal) story from several hundred years ago about the father who performed a cesarean on his wife and took out her ovaries himself to make sure he would never be in that situation again.  I can so imagine that, and it feels so different than the similar stories from a generation or two ago about doctors deciding to take the uterus and ovaries out after a cesarean.

Worth reading, for sure.  Not my favorite ever based on lack of emotional appeal and any sense of activism whatsoever.
Posted by Dawn Star Borchelt No comments:

For More About Me or My Services: